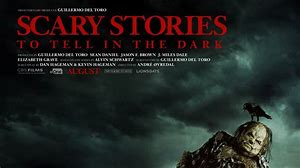 I was not sure what to make of the film when I saw the poster. I thought this was going to be some sort of anthology movie like the Twilight Zone. Instead it’s about one ghost who writes in a book and the story comes alive with hunting results. Some where in-between Goosebumps and A Nightmare on Elm Street lies Scary Stories, a movie that looks like it’s for children but some of the hunting is a little too real. Although, if this was made in the 80s the hard PG-13 would make more sense but now it seems confusing to me. Anyway, it starts off childish and it made it hard for me to get into but it did not take long for the creepiness to come out, which is best done with some amazing make up and special effects. So it take some getting use to but once I was there this movie served up some creepy moments.