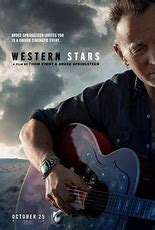 A Great Way to hear a new album.

Earlier this year I tried to get to know Bruce Springsteen a little better by listening to his greatest albums, and I discovered something: I don’t like Bruce Springsteen. It’s funny cause I grew up during Springsteen’s most successful album, Born in the USA and I feel very unamerican saying I did not realize I was not feeling the hype. That’s why I came to see this movie. I need the Boss to change my mind, and what I’ve always known about myself is I like to hear the music live and considering how I feel about the Boss’ stuff, this is the closest I would ever come to hearing him live. Can’t say that it fully changed my mind but I will say I definitely herd some songs that I would not mind hearing again. I guess that’s how an icon like Bruce Springsteen does ya. Someone whose been on top of the game as long as he has, there had to be something I would gravitate towards. Anyway, as a movie this is a powerful one. Weather I liked Springsteen or not I’m a lover of documentaries about music and this was a great documentary about music, about Springsteen, whose spoken word I felt was more magical than his lyrics. I’m sure he has plenty of songs that are as poetic as what he was just saying. In fact the title song Western Stars is one of those songs. I think another was joe’s cafe (not sure if that’s the actual title), which is also on this album. It’s beautifully shot. I loved the atmosphere of the Barn ( it helps that Springsteen himself narrates the images when we are first introduced to it). I’m in a theatre filled with people but I did feel like I was there with Springsteen in this barn as part of that experience. I don’t feel like I leaned more about the Boss, or rather I was expecting to hear a history of Springsteen but the film focuses only on what he was feeling when making this album which for me is enough to know about him. Well I barely like Springsteen’s music and I love this flick so if you’re a fan you’ll flip over it.