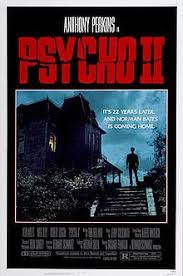 Milking the success of Psycho, over 20 years after the Alford Hitchcock classic. Possibly waiting for the iconic filmmakers’s death before even attempting to tarnish one of the greatest horror movies of all time with an unneeded sequel.
Norman Bates gets out of the loony bin being cleared for the seven women he killed but being back at the hotel is bringing back old memories.
It’s actually a pretty good story with a great twist ending (or endings if you want to get technical).
Like most slasher films (of which Psycho is a classic archetype of), the sequel creates a situation in which the killer can be rooted for. It’s like Freddy Krugger was only scary in the first A Nightmare on Elm Street, but by the second, we were rooting for Krugger to Kill em all.
Most interesting about the story is that it also acts as a new origin story for Norman Bates (or a reboot of the first to allow the character to enter the Golden Age of Slasher films).
Of course the issue with Psycho II is that it’s story is not implemented the best. This could just be that I’m watching it with the stigma that it’s going to ruin the original just by existing.
Then again, the movie also attempts too hard to be far more than the original. The best example of this is the shower scene that actually happens in the movie. Hitchcock was a master of horror because of his ability to give us so much with so little. In the case of the sequel, they felt the need to go rated R. That set the standard to where the sequel is going. It’s everything the original is doing but but a little more sex and gore to please the 80s audience who scene a lot by now.
I did love the cast. Anthony Perkins did not have to do much in this movie (Only making Norman Bates seem crazier), it’s more about the people around him.
Meg Tilly is someone I’m not familiar with. The most I know about her is that she has a sister, Jenifer Tilly whose a sex pot, although Meg was very desirable in this film without doing much. It’s a horror film so you could not help but to be drawn to her for sexual tension. She interacted in a way for Norman Bates that made you unsure weather Bates wants to fuck her or kill her (well we all know what he really wants to do). Great to watch!
Then there’s Dennis Franz, best known for his 13 years as Andy Sipowicz on NYPD Blue. He plays the guy who was taking care of the Bates Motel while Norman was away, but Norman was very unhappy about how he was running the place.
A young Franz kinda looks like a porn director and I thought it was really fitting how he kept referring to Norman as a psycho. Really worked for the content of the film.
Anyway, the movie is just OK. A pretty weak sequel for a movie that did not need a sequel. It’s not a bad movie at all it’s just obviously unnecessary, but what do I know, after all I just discovered that they made a third one.