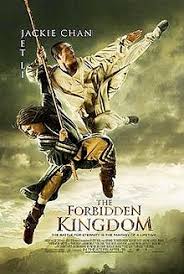 It was the moment we all been waiting for. Jet Li vs. Jackie Chan was truly a thing when both these men where at the peak of their career. It’s like when Schwarzenegger and Stallone did Escape Plan, but unlike that action hero mesh, jet Li and Jackie Chan were still young and skillful enough for this clash of the titans to mean something. Too bad it didn’t.

Perhaps too epic, cause when it came down to the fight, it was obvious this was an mainstream american movie. These cats put on a good show but it was nothing compared to what they could have accomplished if China, who could not afford both of them at once? The director did not know where to put the camera when both of them are fighting. He focus on the foot when he should have been focus on the entire body. I thought it was lame when I first saw it but looking back on it now I approach it for what it was with the knowledge of how better it could be.

Than you have the story of the monkey king which despite being the fav of all of China was never my favorite story. Always found it to have too much talk and not enough fantasy. It should be China’s Lord of the Rings but these people are willing to put in a lot for money just to hear people talk. Oh well. All that matters is that they like it over there.

Still having jet Li and Jackie Chan in the same movie is exciting. Specially in certain scenes where Li and Chan are training the lead protagonist, a Kung fu geek in the Art of king fu. It still is for all Kung Fu geeks to geek over.

Previous: Triple Threat(Forever and a DAY!)
Next: Pump up the Volume