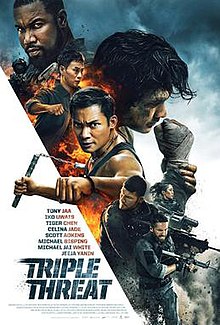 I’ve been waiting for what seems like forever for this movie to come on Netflix. I think it was two years ago that I discovered Tony Jaa and Iko Uwais were going to be in a flick together. I’m not too familiar with the third threat, Tiger Chen. I had to look him up. I think he’s a stunt coordinator who has been good friends with Keanu Reeves since they work together on the Matrix which is why the only acting credit of his I recognize was from the Man of Tai Chi which starred him… 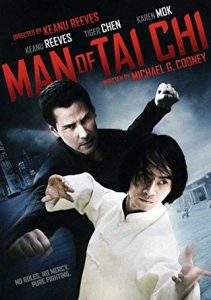 …but had Neo nice and big on the poster.

Man! I was about to purchase this movie on Amazon, but then it finally came on my Netflix and I watched it instantly.
Three of the biggest new hotness in marshal arts cinema and to add to it Micheal Jai White and Scott Adkins are  in it (just in case you need a quintriple threat).
They started the movie with a little tease that featured Jaa and Uwais in a little tiff then another tiff with Uwais and Chen, which made me like, “Oh, this is going to be a step down from Jackie Chan and Jet Li in The Forbidden Kingdom” but by the end of the movie it’s a long and well played Kung fu extravaganza with the Triple Theat battling White and Adkins.

Triple Threat has a plot (do you care?). All you need to know is that the Triple Threat goes after White and Adkins (who uses his naive British accent to sound more like a villain), while Uwais seeks vengeance over his dead wife, Jaa and Chen join him because the lies the villains told indirectly lead to them killing his wife.

I got to see Jaa in a more relaxed state playing a little humorous and not too serious, and that was fun. then the real fun happens when it becomes all kung fu all the time. Worth the effort!!