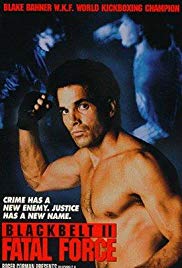 The Electric Boogaloo returns without Don “The Dragon” Wilson!?

Black Belt 2 is about a tough as nails LA Cop played by another World Kickboxing Champion who is not Don “the Dragon” Wilson who was in the original film.

It ties to be more complex as this LA Cop investigates the actions of a series of Vietnam nets who are suppose to be missing in action. A very dark story, overall.

I don’t know if it’s fair to say that this movie suffers from bad action, cause realistically the genre of b-movie this thing centers around does not cause for A-list acting. Not even C+ acting which is the same level this movie feels like ti’s on.

Previous: The Dirt
Next: No Escape, No Return (From Watching this movie!)