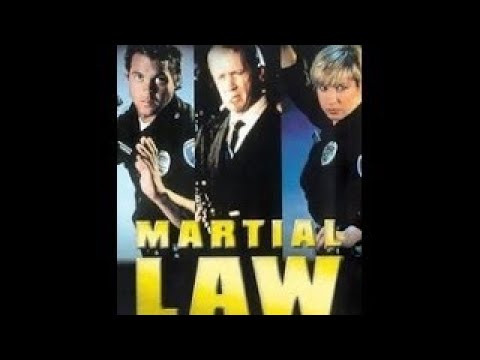 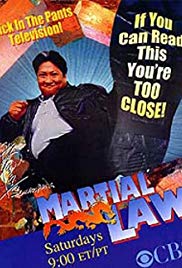 Noooo, not that Martial Law

Someone made a film about 7 or 8 years before with the same title.

It’s a full on Marshal arts film. It’s like a video game. The villain played by David Carradine is a millionaire who runs a marshal arts school. Wow! if they only came up with a Streets of Rage-style beat em up to promote the film that would  have been awesome.

I came to see Rothrock!

The fact that Cynthia Rothrock is second fiddle in this movie must mean this was one of her first films for the American audiences who had no prior knowledge of how this blonde haired blue eyed shorty exploded onto the Hong Kong film scene. In fact, the reason why I wanted to see this movie is because I came across Martial Law 2, which has this super star on the poster, but I figure I see the original before I see the sequel. Though the poster does have Rothrock on it, surprisingly, Rothrock is not the star of this movie,

Instead the lead billing goes to Chad McQueen (son of Steve McQueen) who already had some marshal arts movie experience being one of the cobra kai students in the karate kid. 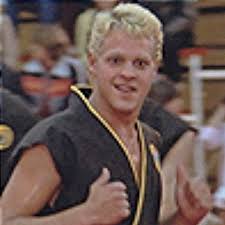 Cobra Kai can make you an action hero too!

Watching the Karate Kid would not necessarily make you think that McQueen had the chops to be a leading man in a marshal arts film, but he gives a decent performance as a police officer with a biker-like look going after the legendary David Carradine. 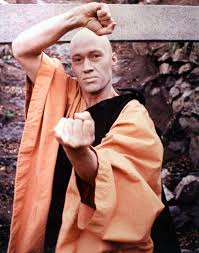 Carradine is a legend in Marshal Arts cinema without being a master of any particular Marshal Art.

Speaking of Marshal Arts legends Ernie from the Power Rangers makes a cameo.

This seems so strange as I grew up watching Rothrock kick ass and take names and it’s odd that she takes second billing to someone who is no match for her showmen ship on camera (but I’m sure the name McQueen goes a long way). McQueen does have a great personality. Cool, like his dad, but slightly playful in the delivery. He’s not playing an indestructible Karate machine, he’s just a man, with a understanding of when he’s in over his head 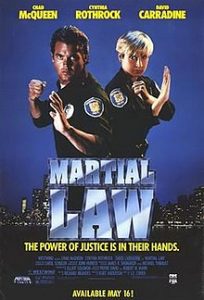 Lucky for him Rothrock is by his side.

I can see how Chad’s fame did not burn that bright however. His dad’s name only got him so far I guess, and even though he seems like the kinda guy who would put in the work, his look was not that of a superstar and I think that’s what killed him. If he really knew Karate like that then the look may not have mattered but doing a Hollywood comparison, Chad looks like a good looking cop versus a good looking actor playing a cop. What!? kinda true. He could be a heartthrob on the police force but maybe it’s not what Hollywood is looking for, despite what looks like some good acting chops. He’s convincing in what ever you need him to do on screen.  All this was done and the filmmakers did not even need all those pointless set up shots of McQueen trying to force coolness “Hey look at mean up leaning up against a pole with one leg up eating an apple, I’m so cool”.

Cynthia Rothrock is at her most believable as a tough as nails hardcore karate Queen, showing off her lady like demeanor as well.

Pretty good watch overall, as I see it.