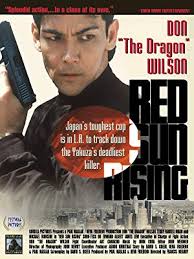 Searching through my Amazon Prime wishlist for a movie can be difficult. So many to chose from, so many good ones, so many bad ones, and so many so bad they are good ones, Makes it hard to navigate. I do have some pin points that I usually look for.

Like for instance: nudity, I’ll be blunt, I look for a movie with nudity in it, it’s usually a good choice, although sometimes it gets boring watching a film just to get a brief glimpse at some boobs (but sometimes it’s worth it).

So far the works of Don “The Dragon” Wilson have been a constant pleasure. He has yet to disappoint (and a lot of his b-movies have nudity in it).

I’m not convinced that the kickboxing legend and Action movie star, can speak Japanese. The film itself seems set up to allow his Japanese to be dubbed. Just a few too many times when his lips are facing away from the camera while he speaks makes me think this is not among his impressive skills, or another theory, Don can speak the langue by american standards, but not by Japanese, and he did not want to “dishonor” himself by butchering his mother’s native language.

Its this possible idea that actually makes the Dragon perfect for this role. He plays a Japanese cop whose only half Japanese so of course in order to fit in he had to be more Japanese than the Japanese, but he’s a bit of a wreck loose, who got his partner killed and seeks vengeance for this action by tracking down the head of the Yakuza,whose main henchmen has the power of the death touch.

Though not a story based on a real situation, Red Sun Rising is advertised as being based on info about the death touch, some sort of mystical Japanese thing that’s not really about marshal arts but a dude who gets roided up with some magic juice that give him the ability to kill by touch, heel by touch and hypnotize folks.

Wilson travels to LA to seek this vengeance where he teams up with an LA cop, played by Terri Ferrell, best known ast the time for her playing Dax on Deep Space Nine. When I saw she was in the movie I thought that was a big thing for a b-movie. It just seem like a big cast which also includes Michel Ironside, who plays the captain of the LA police force. It’s rare to see Ironside playing a good guy, but his character is complicated. Mako is also in the flick. He’s plays Wilson’s sensei and mentor who moved to Japan and as a full blooded national did not feel the need to be too Japanese in lay backed California and it shows.

The film does suffer from a few bad cliches as Wilson and Ferrell play two cop from two diffrent backgrounds who seem to have a culture clash (she hates the japanese cause they are vaguely responable for the death of her father cause of the job he took after they took over the automotive biz in detriot. He hates Americans cause…Well, no one really needs a reason). The moment Wilson said something about how big Ferrell’s car is I knew where this was going.

The film does not suffer form some great marshal arts action. Any movie in which Capoeira is being done gets an A in my book. Dope!!