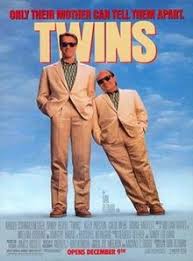 So I just spent twenty minutes trying and failing to convince a young friend of mine that twins is the greatest movie ever(or at least on of them). As far as I’m concern it is.

Twins came out the same summer as Tim Burton’s Batman. That was also the summer of Do the Right Thing, The third Indianan Jones  film and the second Ghost busters. If I’m not mistaken (or as far as I’m concern) this was the beginning of the summer blockbusters. Sure, blockbusters existed already, but as my memory perceives, this is the first time all the blockbusters were gathered for one season, and for the next decade I planed my summer around all the blockbusters I was going to see during. Twins was a part of this, my first blockbuster season.

That summer I possibly saw Batman about 13 times at the movie theater I loved it so much (plus I think it only coast about 4 bucks for a child to see a flick in those days). If I saw Batman 13 times then that means I had to have seen twins at least eight (I remember them playing at the same theater, spending 10 dollars but sneaking in my own popcorn, so it’s an assumption were they rest of my money went).

Arnold Schwarzenegger plays the world’s perfect man living in isolation, when he discovers he has a twin brother and decides to go on the hunt for him. “He probability looks just like me” was the funny line Arnold said before he went on his quest but of course the ironic (and hilarious twist) is that Danny DeVito, as it turns out, was the other kid in the womb. A bizarre situation comedy that would have been as perfect on TV as it was for the movies. Now as Julius (Schwarzenegger) gets to know Vincent (DeVito), The brothers vibe rubs off on one another. Vincent teaches Julius how to be street smart and Vincent becomes a better person around his “older” brother, and when this happens the two decide to go on a search for the parents that had them so long ago.

Now maybe if this was the way that I told my friend the plot for Twins she would have been all hands on deck to see Ivan Reitman’s second hit of that summer (cause he also directed Ghostbusters 2), but that’s not how I did. See When Twins reaches it’s third act in the search to find their parents (Spoiler alert:) They discover that they were a science experiment, in which Julius came out the perfect specimen of man and Vincent became all the crap left behind that would not make Julius perfect. In my head it’s a little funny, cause In my head it’s like cooking a steak on a George Foreman grill and they have a little grid cup where all the fatty juices come out.

Out of content, this image is kinda dark. I remember quite well in the movie when Julius and Vincent tracked down the place were they were born and one of the scientist responsible opens a lock door that leads to a lab. Vincent walks over to the machine and says “is this were the milkshake was made?” for you see according to the scientist that showed them the room he was one of six men who…bust a nut int a cup, put it into a machine that actually does look like a Milkshake making device and they inseminated it into a young women who would the twins mother. I use this part of the movie to explain the overall plot and I can see how to this new generation that seems real yucky (Man we can go back  and watch anything these days).

To her it must have sound like six egotistical men got together to built the perfect man (and I say built because you can tell they were going for a sutle Frankenstein vibe to the room they made as the birth place) and they all injected their semen into a young women to do so. It does not help that when I went back to watch the movie, I also got that yucky effect. See, the last time I saw twins I did not know enough about female medical treatment to recognize those things women put their feet in when they get their vaginas checked. This does add a lair of darkness to the overall seen.

Another thing I noticed that makes the seen darker is at the time that DeVito was doing Twins his acting persona was that of a scumbag. Good or bad, DeVito made a career in the 80s of playing slime balls that were mostly in it for themselves. Actually, come to think of it he was always a lovable slime ball (cause he so funny at it), in his biggest pictures like Romancing the Stone and it’s sequel Jewell of the Nile, also a bit lovable in through Mamma From the Train where he was not really a scumbag but wanted to do something (Or rather have the delightful Billy Crystal do something) that would make him a scumbag. This is why it was so easy to laugh at the fact that Arnold is the steak dinner the Foreman grill makes while DeVito was the left over grease juice (That I pour on top of the steak for extra flavor). If you did not know this about DeVito prior to watching Twins, the scene takes on even more emotion, as Vincent spent the whole second act bonding with his twin brother and became a better man for it (Starting out in the movie as a two-but hustler), only to find out in the third act that he was the man he was met to be from the beginning, which sends him down that dark path that Julius will need to help him out of. 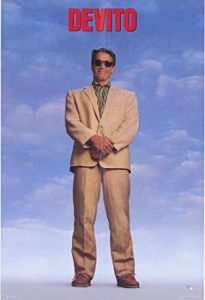 Schwarzenegger does not do a lot of action in the movie (none at all really), but he does get to do some feats of strength. Like one part when a guy on a motorcycle tries to steel his suit case only for the oak to stop him by just having arms like tree trucks with a grip that cannon be loosen. Thought he spends the entire movie in undersized clothing so you can see how still defined his molded body is, as if it was drawn by a comic book artist, The future Governator focuses on his comedy more for Twins. He has to get it right cause it’s his first comedy, and I think he nails it, man. If I never though of Schwarzenegger as an actor before his comedic timing change my mind. The amount of money that Twins made in 1989 met that Schwarzenegger would attempt this a few times like with the semi-comedy Kindergarten Cop which came out a few years later. Then there was Last Action Hero in which Schwarzenegger tried to make fun of himself basically, but that did not work out (Except for one bid in which a bad guy sends him a letter which was just a series of cards that counted down the ticking bomb in the house). Then he stopped trying after Jingle All the Way failed, which is a shame, cause I actually liked Jingle All of the Way.

I herd that the next team up of Schwarzenegger and DeVito,a film called Junior, was a sequel to Twins. I can’t tell you if this is true because I never seen the film, but it looks like DeVito is playing a different character. I actually herd that DeVito and Schwarzenegger got into a argument which resulted in The Oak picking up DeVeto up and shaking him around and DeVeto letting Schwarzenegger know how bad Last Action Hero was (Definitely hope the latter is true because that’s hilarious). In Junior Arnold plays the world’s first pregnant man. Not that I’m not down with the concept, cause I love the episode of the Cosby show in which all the men on the show got pregnant, but when a movie is considered that bad sometimes it falls out of raidar and I think that’s what’s up with Junior. Maybe I’ll see it now that I’m blogging just to tell people about it.

You may have also herd that they have been working on a sequel to Twins called Triples in which Eddie Murphy was somehow the third child born in this situation’s comedy. Sounds absurd? Maybe. Although I think it’s scientifically impossible to make a sperm milkshake that would result in six dudes being the dad of one (or two (or three) babies from one pregnancy. I do have the perfect plot if Hollywood wants it: In Twins a picture is shown of all the men that are Julius and Vincent’s fathers. In triples, you would take a good look at the background of said picture and noticed there is a black dude with a mop in the background. The only way this would be better is if Murphy’s brother Charlie was still alive to play that dude in the back with a mop and when the three men try to track him down it makes a great chase scene cause dude with the mop is not trying to claim no big as terminator looking mutah fucka or some little as shrimp. Oh Well, Kevin Hart’s just gonna have to do it, or even better….

A remake of Twins Starring Kevin Hart and The Rock. OK, someone get Hollywood on the phone cause that needs to happen. 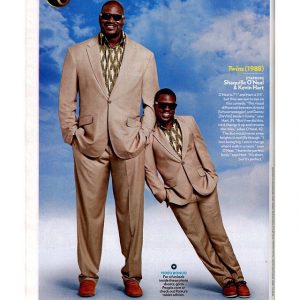 Oh Shit! This would work two.