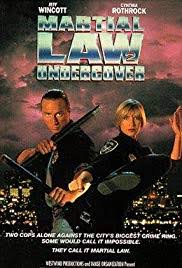 In the sequel to Martial Law, Cynthia Rothrock ‘s is riding solo on the cover (of the poster as seen on my Amazon Prime account.), but this is only because by now she’s the biggest star in the movie but she does not take center stage in this sequel.

This role goes to Jeff Wincott whose replacing Chad McQueen in the role of Scott Thompson. Poor Chad, maybe? It could be that Chad quit acting and or Jeff Wincott is a better Marshal artist ( A little bit of both?)

Anyway Scott Thompson gets a promotion to detective and is moved to a new division where an old academy friend of is killed when he discovers police corruption, so Scott needs the help of his old partner (And lover in the first movie, which is not even mentioned in this one) Billie Blake, who goes undercover as a bartender at the bad guy’s shady yet upscale club, to see what’s going on.

I just realized that Billie Blake is kinda of a man’s name, which does make Rothrock’s role in it sweeter, cause they picked the right marshal artist for the job.

Both movies are similar (but with Wincott we do get a lot more and better karate action). The bad guy in the movie mimics the bad guy in the original a lot. Course David Carradine. plays the villain in the first one and he adds a lot of fineness to it. The guy that replaces him acts too much like a stock villain, but it’s basically the same charter, a millionaire business man claiming to owe his success to Karate when in fact a lot of it has to do with the shadier parts of the business.

This stock actor is not bad but perhaps this movie would be better if Billy Dargo added some fire to the bad guy role. Instead, he plays the captain of the police force who is a little shady but for good reasons.

It’s the type of sequel where the first one was good enough to make a second one for more money but without changing why people went to see the first one.

It’s pure marshal arts action with 25% more marshal arts thanks to Winncott, but really I came here to see Rothrock and you do get at least 10 percent more with that.