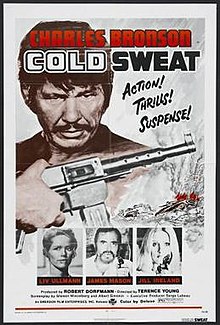 Another movie starring Charles Bronson with a cool title, but the Evil that Men Do was not as cool as it’s title which is why I was slightly hesitant to watch this, but in the end it was a solid choice.
A 70s action movie in which Bronson plays an American living in France with a wife and step child when a past he was running from totally catches up to him and when they threaten his family, he threatens back. That last line, I’m making Cold Sweat sound a lot cooler than it actually was, not that it was not a cool movie overall, but I feel the chick playing Bronson’s way younger hotter wife was a ride or die bitch who, if this movie was made in 2019 would be played by like Michelle Rodriguez or something. Maybe I’m over bloating it based on the potential I see in this character.
putting things back into perspective Cold Sweat was a gritty action thriller filed with enough gun play and car chases for it to be a worthy action movie to watch. Far more decent than The Evil that Men Do, if you ever come up on that choice.

Previous: Wake of Death
Next: Twins