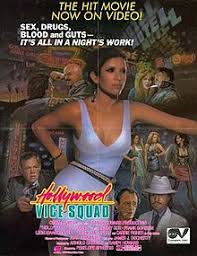 Not exactly the type of movie I would expect Carrie Fisher to do After becoming world famous in Star Wars. I remember Mark Hamill being in this really low low budget film called Slipstream in which he played a futuristic bounty hunter (or a bounty hunter in a futuristic time, I forget) that’s what I would be expecting from Princess Leila. it’s quite possible she just did not want to get typed cast.

I’m sure in 1986 she was great to have on the poster front and center to get dorks who want to see their fav princess again on the big screen.

The movie is about a series of stores about the vice squad that happen to be woven together. The story that woves them all together the most is the most stereotypical of them, about a mom who comes to Hollywood to find her daughter who ran away. As she narrates how her daughter does not have the skills needed to survive on her own they show us images of her daughter (played by a really young Robin Wright) using her body to survive the streets of Hollywood.

Fisher is possibly the biggest name on this bill (Though not really treated as such within her story). Other than Fisher, The biggest notice for me was the guy who raped Pam Greir in Foxy Brown is now playing a cop. I have not seen this guy in many movies so all I know him as is a bad guy and he looks like a bad guy even playing a cop (which technically make sense). Also, the dude from that show Star Man (Based on the film of the same name) plays a pimp that lores young women into his den by pretending to be a movie producer (so Hollywood). In Star Man he plays a FBI agent hunting down the two protagonist yet their seems to be no difference in his persona despite being on two different sides of the law.

Oh and I should not forget Ronnie Cox is in this movie. One of the better parts of the film as he plays head of the vice squad who is confronting the mother trying to keep her in a positive perceptive without lying to her about what’s happening or could happen to her daughter.

The movie works in the fact that it is a bunch of different stories working together. You definitely have one main story but then their are little side ones that remind me of police dramas on television, specific Hill Street Blues which was on the air at the time this film came out.

Previous: Dirty O’Neil
Next: The Evil that Men Do