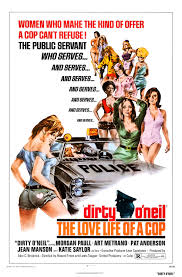 Overall, I enjoyed it.
When I first saw the poster of Dirtiy O’Neil lumped in with a bunch of other soft-core b-movies from the 70s that was on my Amazon Prime feed, I assumed I was getting a film about a woman cop whose hard on crime as she is on her men or something(That would have been fun to watch (Especially for a 70s flick)
That was not Dirty O’ Neil. Instead, Dirty O’Neil was a movie about a small town cop on patrol for criminals by day and on patrol for pussy, by night. It’s a story that is borderline porno and the movie was formatted to showcase this, as James O’Neil would get a call over the radio of some sort of shit happening and when he gets there he finds some hot chick looking to get banged.
There was one line in the film that sums it all up. “A cop should never be horny”. I have to admit those are words all cops should live by. Just imagine if all we need to end police brutality and prevent young black men from being killed by the cops was just to have them provided with sex on a regular basis. To be honest, it’s not too much to ask your Mayor or your congressman to make this a thing (This or more training)
The movie is a complete package too. They would have had a fine film just keeping with O’neil jumping into bed with many random women, but the movie chose to show a message, a message that happens to be about being a good police officer, something that all cops should see. kudos