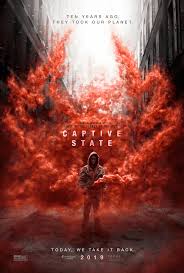 Not as Captivating as it needs to be.

It’s an interesting political thriller with the dressing of a Sci-fi movie, that’s overall satisfactory but it has the tendency to get dull at times, sometimes so dull you miss it’s attempts to be cleaver and intelligent.

It’s a mystery that needs to be unraveled, but too many elements in it that are not really needed. a lot of stuff met to make you look the other direction so you don’t see it coming, it technically works too well cause by the time I come back from looking the other way I forget what was directly ahead of me, and they had me looking too long in the other direction that I no longer care what’s right in front of me.

The sci-fi backdrop was a cool idea. The visual elements of the movie is what really makes it feel Sci-Fi. The story happening in front of you makes this a political thriller about a resistance group planing a terrorist attack, while certain small visual tones behind it make you remember that this movie has aliens in it. It’s literally an alien invasion story that’s not about the aliens almost going one step forward then movie like District 9 (but not as well polished)

Captive State is trying too much and not succeeding in all it’s attempts. A very cleaver idea not full flushed out.