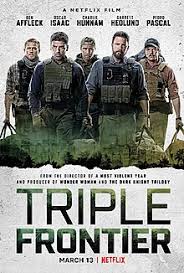 It’s a movie that has the type of all-star cast that I want to see ensumbled together.

Oscar Issac is one of my favorite actors. He works hard at diversifying himself and he makes it look so easy.

Charlie Hunnam is another dude who cares about bringing variety to his resume even when he has that outlaw outsider with a a heart persona down packed.

Than you have Ben Affleck whose has been making a lot of movies that I love lately. Not feeling that tiny gut he’s grown lately as it seals the deal that he’s no longer the Dark Knight (Which I think sucks cause I liked his Batman).

And Pedro Pascal is a new face for me among these dudes that has popped up on my radar since his amazing turn in the Netflix show, Narcos.

The  five men are fine actors and have great chemistry together. It never weavers that these guys are old friends in combat, such a outstanding mosh up.

It’s a heist movie where these guys are going down to a South American country to pull a job. It’s also a story about how not being respecting for putting your life on the line for your country can change you into something that you don’t want to be and how a lot of money can make you even worse. It’s amazing how people who seem to have all the integrity in the world can talk themselves into giving it up (Then again, the drug Czar or dictator or…I not sure if I caught who he is (not important) had enough money stashed in his walls the even Mister Rodgers would consider popping a cap up in somebody who would come between him and becoming the 2 percent)

Hunnam recently got into a little trouble while promoting this movie due to him being into some “Men’s rights” leader who post things on the dark web, but I will say, I think I understand why he thought this line of thinking would be OK. simple because this is a movie about male relationships. Although you could make the argument that the movie is about Soldier relionships, which is true, but most of these soldiers (like most soldiers) are men, and this band of brothers thing was really working overtime in this film.

The music following through the film works for me, especially the constant drop of Metallica songs (I always though Orion would make the perfect end credits song)

Overall, the movie totally has me on the edge of my seat the hole time. Never a dull moment and you never know what to expect. It’s way too real, grimm and bitter sweet, and the combination makes for such a complex and complete movie about the human condition.