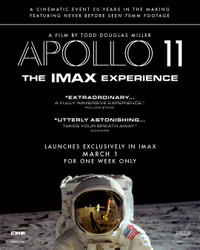 I’m kicking myself right now for missing the week long event in which this film was projected on an IMAX screen cause on a regular screen I can clearly see I missed out on something. Yet still, this was worth the time and effort. Especially if you are a fan of such things as putting a man on the moon.

the thing about living in a world were media is so important, almost everything is already documented. The filmmakers just took the entire broadcasting event of the Apollo 11 mission and put it together like a narrative story. Back then everyone saw everything in bits in pieces over the course of a few weeks as news coverage and NASA personal film archives, but now this movie puts the event together in like 90mins, and it looked wonderful.

It’s completely fan fare, for space nerds but there is something about the impressiveness of the fact that the human race made it there that’s got to catch everyone in ahh.

Could not help but to be on the edge of my seat. Loved it.