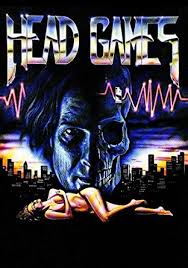 I really liked this film!

After streaming through my Amazon Prime account, watching shitty movie after shitty movie I came across this, Head Games, which is still a shitty movie, but I like it far more than all the shitty movies.

I’m not gonna lie, it has nudity in it so that’s always favorable, but I think the best part is the time an era the film is in.

Head Games is about a physiatrist who was a part of a brain implant experiment where a prison attempted to use a chip to reconfigure the minds of serial killers. At first the project seems to work, as they seem to be completely different people, but it did not take much to trigger their old ways and have them back out on the streets killing.

It’s obvious that Head Games came out in the 90s. Though there is nothing particular in the continuity that puts it in that era (like everyone is not wearing Batman Tie dye T-shirts or playing Game boys or anything), it’s everything that’s so generic about the movie that will forever place this in the 90s. The look of the film, the feel of the characters and that generic hip hop sound of the streets. The cheesiness of it all just makes it a fun movie to watch.

Also like that the movie takes place in New York. Something I was not expecting from a low budget b-movie of this caliber. They usually film it some place like LA or somewhere in Canada, and even though it would not surprise me that a bulk of the picture was filmed in Toronto or something, I did recognize certain landmarks that told me a lot of the film was done in the Village of NYC. Maybe it was even a production of NYU film school or something cause a lot of the film was done in that area. It’s fun to see what New York use to look like

I love this one part in which they filmed a scene in front of someone’s billion dollar townhouse and tried to convince me that a homeless guy would be sleeping out front and a bike messenger can afford the rent. Then again, it’s an early 90s flick before the a major overall of New York was done to clean it up, so it’s possible that the place was only worry of the lower end in 1993.

Anyway, it may not do anything for you if you don’t remember the 90s, but for me it may have been corny but it was fun.