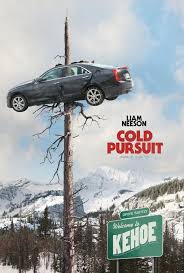 Indeed very cold. I thought it was Alaska it was so cold but the movie took place in codorado.

This is one of Liam Neesens best efforts. So good that I hope to god he is not racist like the promotions for this movie seem to make him out to be for some remarks he made.  All men of every race creed and color love Neesen including black so I’m really hoping this it not true, espically because this is one of his greater films.

Is funny as hell. Almost poking fun of his action movie persona, Neesen plays a father whose son was killed by drug dealers and he goes on a mundane killing spree to seek vengeance.

The slow quiet burn of action is quite fitting to the backdrop of a small ski town where people go to relax and smoke weed, and to make up for the lack of shit getting blown up or dudes getting blasted in cool gun fu like sequences, the absolute humour that Neesen goes after these dudes with is absolutely fantastic.

Just when Neesen has got his game face on we try to bury him. Sucks

Previous: The ​W​erewolf.
Next: The Lego Movie 2: The second part