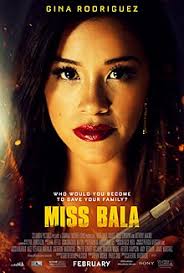 The trailer did a good job of explaining what this action movie is all about, except for one thing: the title itself.

So the trailer is all like Gloria is a Mexican  American chilin in Mexico with her freind when they get caught up in a shoot out in a club that leads her freind to gettung kidnapped and Gloria gets tangled up with both the drug cartel and the DEA in order to fund and save her friend.

What the trailer does not tell you is that all this happens within a sub sub plot that envolved the events occurring durring miss Baja California, a beauty contest that does eventually move the story toward.

In the opening credits I did notice that this movie is an adaption  of a Spanish speaking film. I’m wondering if in that version does the Miss Baja thing make more sense? It’s just such a small part of a movie that moves so quickly and I would not be surprised that in a Mexican movie if they spend more time on the pagent.

Anyway. It’s not like that would have made this film a whole lot better. Honestly hoping to get the action triller of the century with a hot Latina leading the charge guns blazing. Instead it only showed me how different my mind set is now than it was when I was younger.  Things that I would not have even noticed before 2013 are joe making me uncomfortable. Like the fact that every man in this flick kept treating Gloria like a piece of property

Previous: Hijack
Next: Evils of the Night