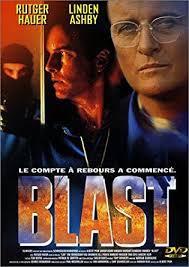 Decent attempt at putting a unique twist on an action flick. Linden Ashby who I know best for playing Johnny Cage in Mortal Kombat, plays an Olympic level Karate master who gets inured and messes up his leg forcing him to become a janitor. Perfect timing as his wife and a group of Olympic swimmers are being held hostage by terrorist.

Attempting to set it aside form any old action flick is the fact that they use the protagonist leg injury to full effect in the movie. He’s not a perfect marshal artist any more and he’s trying real hard to take down these terrorist. Some of his battles he’s holding on by the skin of his teeth to win, and he gets tired after every fight, but like all action heroes he has to keep going because his woman is in trouble.

Maybe Linden Ashby’s Karate kicks and flips are not on the level of Jean Claude Van Damme which is why they came up with this story arch, but thinking that they were trying to bring a realness to the marshal arts genre is the only thing that makes me think highly of the flick. Otherwise, I’ll forget it when I wake up in the morning.

Previous: Mary ​P​oppin​s​ Returns
Next: They Shall Not Grow Old