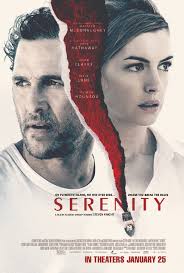 Home » Uncategorized » Serenity (Wish it was about Firefly)

I would give the movie an A for artistic merit but I’m not sure it deserves that.

The movie starts out very basic at first it’s very easy to understand the plot, but as it progresses things are added that just make the movie very confusing about what the hell it’s going on, but this does seem to be the purpose of the film, to have us looking in the other direction. That makes sense in this type of thriller.

However, by the time the big reveal of what is indeed going happens. I say to myself “oh, that’s interesting” but it;’s not interesting enough to make me give the film credit for it’s attempts at original film making. By the time we get there, I’m far too bored to care.

The film does have a really good cast of actors to keep me interested. I think Matthew McConaughey is good at making the mundane seem interesting, and they nominated Djimon Hounsou for an Oscar twice for being able to support these “movie stars” while doing… whatever they are doing.

Jason Clarke was interesting to watch on the screen as a blowhard of an abusive husband and I wish that Diane Lane had a bigger role.

Plus Anne Hathaway’s turn as a “femme fatale” in this Neo noir is very pleasant.

None of the skills of these actors, however is doing anything to make the film itself a better watch overall. It’s still (original but) dull.