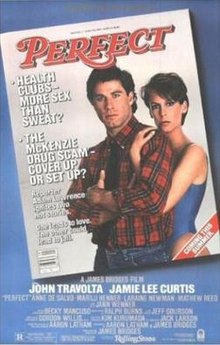 That was good! That was really good! I don’t know why I was under the impression that this was not that good of a movie. It was not as…perfect as the title would suggest.

Unless you are only talking about the two stars of the movie, John Travolta and Jamie Lee Curtis. They are perfect.

Travolta is perfect! Especially during this era. Right after Saturday Night Fever. He’s like an action hero doing an action movie. Travolta by now was known for being able to move his hot bod. This is just a different dance floor.

Curtis is perfect! To put it bluntly, the only reason why I watched the movie. You forget that Travolta is in the movie but never Curtis, they’ll never let you. any footage I’ve ever scene of this flick has Curtis in a tight fitting aerobics outfit trobing and gyrating  that amazing body. It’s no wonder I thought this movie was trash when that’s the only part of the movie they are showing to get you in the seats, but despite the watching Curtis tight but wiggle it’s actually a good story well played out by the actors.

Travolta and Curtis were so good together. Two very attractive people showing they have good chemistry. Watching them banter on the screen was the gem of this picture.

Too bad the picture does not make me want to work out, it just makes me want to watch hot people work out. Oh well. Perfect does the trick.

Previous: Serenity (Wish it was about Firefly)
Next: Silent Trigger