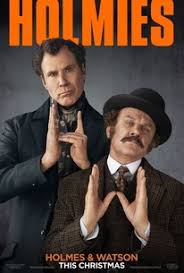 It was not funny on the level that it should be.

It’s the same mistake Bill Murray made with Garfield. Have you herd the story? Real short, Murray agreed to do the voice of Garfield in the god awful live action remake because the movie was written by Etan Cohen who he mistook for Ethan Cohen (One of the Cohen brothers).

I saw the name Etan Cohen as writer and director and assumed that the Cohen brothers had teamed up with Will Ferrell and John C. Reilly, but indeed this movie is just as bad as Garfield.

What an non epic movie to release on Christmas. Holmes and Wastson would have been better received (by me) if it was a Christmas special on NBC not something I had to paid money to see.

It felt too rush together to be anything else.