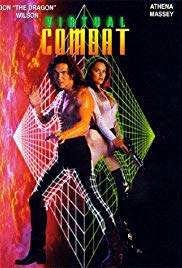 Just another day trying to figure out what movie to watch when I came across Virtual Combat on my Amazon Prime membership.

Amazon Prime is always tricky because you never know what’s worth watching and sometimes the stuff you want to see you have to subscribe to a specific channel to see. Sometimes it’s a movie that’s so bad that it’s shocking that they could get anyone to shell out money to rent it (Then again, those are always the films I want to see).

I had a bit of a Don “the Dragon” Wilson marathon on Prime not too long ago. I missed this one during that, but watching the Cyber-Tracker movies back to back totally prepares you to love this movie before you even see it.

Like Cyber-Tracker it’s a B-Sci-Fi action film with Wilson doing marshal arts. It takes place in a world in which VR is as commercial as it is today, which back in the mid-90s was very futuristic. Back then, the technology for VR had the helmet we use now but it also needed (At least form a Sci-Fi point of view) a VR jump suit and some sort of gyro machine that spins you around so that your center of gravity is deluded enough to make the VR world inside more real (I think. After all this part of the technology is not used today). So, looking at the movie right now, very little is Sci-Fi about the VR(That’s cool in itself that we got to that point), but the hard Science becomes soft when a scientist uses some kind of cloning liquid to make VR programs real people. Intentionally, the company the Scientist works for wants to make an army of sex slaves basically (cause nothing advances media based technology like sex), but he accidentally leaves the machine on and it brings the final master in a game called Lethal Combat to life.

It’s interesting how this concept is all about bringing fantasy to life. While the majority of the movie is about dudes getting their rocks off over the idea of making the submissive pussy they encounter in games enslaved real pussy. All except Wilson’s character who takes his Kung Fu as seriously as all Kung Fu movie masters and only dreams of defeating the level ten boss of Lethal Combat, Donte.

Donte is a super cheap version of Shang Tsung from Mortal Kombat, but he does come with a really cool voice over by Star Trek’s Micheal Dorn and an opening sequence that shows you how the game works as a Mortal Kombat styled beat em up, and as cool as this action police drama is, it does make you wish the game was the movie or there was an actual game called Lethal Kombat.

So we have VR, we have Mortal Kombat, but this cheap flick rips off yet another Sci-Fi genre. Wilson does not just play a cop, he plays what they call a Grid Runner (sound familiar). Grid Runners are more like private security enforcement that go after hackers for big businesses, not particularly digital programs brought to life using a pool filled with gel used for cloning. In a lot of ways this makes the film feel like a Blade Runner prequel, showing the year the replicants were created and the year they rebelled with Donte acting like Roy Batty and rallying the clones using psychic powers he had in the game.

Virtual Combat was a perfect B-flick for me as it had everything: cool marshal arts action, hot babes showing boobage (It’s funny how I did not remember seeing this movie before until I saw this one chick get naked in a love scene) and not one but three science fiction stories warped into one that was told so well that it does not matter that the movie was too cheap to do them visually (In fairness, the film’s center of attention was a Ex-kickboxer turned b-movie star and that part was perfect)

Previous: The Wife
Next: Holmes & Watson