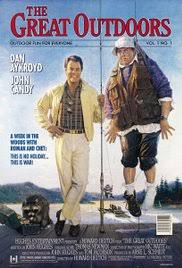 It’s been so long since I’ve seen this movie that I forgot the plot, but as I watched it my memory was refreshed. It’s a strange feeling, cause when I picked up the film to watch it I was under the impression that I herd of the the film (Remembering the commercials from back in the day of John Candy being stomped on by a bear that just broke into the cabin door)but never seen it. Then as I watched it it realized, totally did see it.

I just finished watching Plane Trains and Automobiles not too long ago and off that movie I was expecting John Candy to play the annoying guy in the Great Outdoors cause he was so good with it in Planes Trains and Automobiles, but instead he’s more like Steve Martian’s character in that movie (only nicer) While Dan Aykroyd plays the annoying guy (if you look at the design of the poster it’s clear who’s who as well).

Aykroyd plays a city slicker who invades the camping trip of his brother-in-law, played by Candy. This makes more sense the more you know of John Candy (Actually, I don’t know much, just that around the same time he did this movie he had a cartoon called Camp Candy in which he did live action segments that showed children how to camp).

Anyway, the movie’s OK, but not that good. It’s not funny, It kinda goes through the motions, using very little story which would be fine cause we are watching it expecting two of the funniest men of the 80s to make us laugh, but it does not happen.

I should say it was a good effort, but it really wasn’t. It was a film that should have been better than it was.