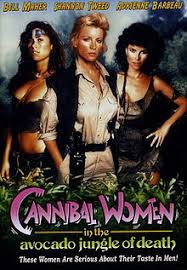 Home » comedy » Cannibal Women in the Avocado Jungle of Death

I remember when I first saw this movie I remember that it was funny, but what I realize is, I did not think it was funny, I just like Bill Maher, and I’m sure at the time I saw it I was the biggest fan of Bill Maher so I found the film amusing because of his involvement. Seeing it out of content cause I know Maher from Real time with Bill Maher and to see him do this buffoonery, which I’m sure happen when he was a struggling comedian was just hilarious for that.

It is kinda of a cool movie just because of it’s ability to make fun of itself, starting with the title Cannibal Women in the Avocado Jungle of Death. The Avocado Jungle is actually located in California, which is probability where the movie was filmed. Very brilliant I guess instead of pretending that they were filming in the rain Forrest. So the government forces feminist, Dr. Margo Hunt, played by Shannon Tweed (who I recognized by voice but looks kinda different in this film) to go into the jungle and find another feminist (played by Adrienne Barbeau) who has not been seen since she was trying to get into contact with the Parana  women, a version of California amazon that look cute in their leather bikinis and eat every man that comes into their jungle.