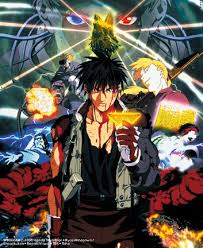 A strange rear anime that I did not see when I was growing up. I’m not surprised. Though I think the anime is good it does not feel very anime to me. It’s an action movie about a super spy from Japan. The most anime ideal of that scenario is the fact that this Spriggan from Japan (Other than being from Japan) is 17 years of age. It starts out with the type of action sequences that you would see in James Bond than as the story progress so does the anime. Like the fact that this Spriggan gets an exoskeleton suit to increase his own natural skill cause all of his villains are half machine.

I must say that the English dub of the movie I found was of the highest quality, meaning that I think spirggan was suppose to be a hit in the US cause they pulled out the bills for it to do that, but The ironic twist is that Spriggan is not like an anime, especially for those who would have first scene this back in 1998 when it came out (According to the copy)

Otherwise, taking it out of the genre it’s actually a cool movie to sit through.