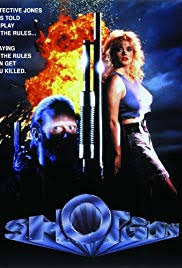 Buddy cop. One black, one white, both bad actors, both shoot first and ask questions never and in the sleazy Hollywood version of LA, you need that type of cop to take down a psycho that beats whores to death.

The mucho dick, testosterone driven “action” flick would be too much for me if it not for the fact that one of the cops (the black one) use to pedal fried chicken in a series of KFC commercials in the 90s while his white counterpart really needed to look in the mirror before leaving the house, cause yeah, I guess his style was 80s but even back then people laughed at him.

Shogun in all the ways that matter feels like a film milking the success of Lethal Weapon, but Riggs and Murtaugh they are not.

Then by the second act the movie takes a turn when the white cop (The sterotypical type that does not play by the rules yet somehow he’s a cop (I say that as if there is not any truth with that reference) becomes a bails bondsman whose really though on the bounty.

Then it ends with a little Tango and Cash Style action, which I’m not hating.

Shogun does have a pretty cheesy yet still bad ass action sequence to end the film, so the film does not go completely to waste, plus I can’t help to love the 80s guitar lick.