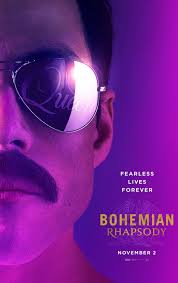 I loved the movie. I had been dying to see it since I herd of it. Rami Malek just looked the part so I wanted to see it for that. For the most part Bryan Singer creates a very formulated rock epic indeed, but I think that’s just how a biopic about Queen would be. If the film is at all accurate about Queen then the band did not really have enough drama to make a movie about. It was so cool to see that there is a band that truly gets along like family(and they kept on playing till the end)

However, most of the flick is about the life of the late Freddy Mercury (Who I did not know was Indian) , the focus mostly goes through his own personal journey from the time he met the other members of the band that would become Queen, to his death.

Rami Malek was absolute incredible in his transformation. He made you a believer. Thank god, cause if he just looked like Mercury without anything else this movie would tank.

What made the film so great for me was the relationship Mercury seemed to have with the band. Like I said before, it does not seem like the band had the much drama between them throughout their life span so most of the film is about four friends making music together, and that’s great. The chemistry between Malek and the other actors was well received, just beautiful to watch.

Bohemian Rhapsody is a love affair with Queen cause it’s a lot of their music in it performed by the actors, not really most likely, but it did look like I was watching the ultimate cover band in IMAX. As well as they acted their parts they also Semi-performed the songs well. They look really good lip syncing and if you love Queen, this will be something you want to see.

Fantastic, exciting, witty, overall well done. Thanks Mike Myers for the introduce in Wayne’s World that made me love the music more.