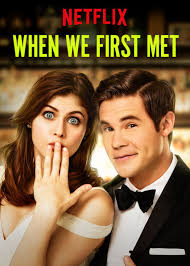 Home » Uncategorized » When We First Met

So Netflix produces yet another film that’s basiclly a remake of Groundhog’s Day. I had to watch 30 mins of the film just to make sure. So now I’m comparing Adam DeVine’s  performance with Marlon Wayans in the Ground Hog’s Day rip off, Naked (Nah, Marlon literally bares all for his performance so…)

Well let me give When We Frist Met some credit it does have a Time Travel theme to it that gives it some uniqueness over the  Bill Murray comedy. Adam plays Noah who starts out the movie going to the wedding of the woman he loves, Avery  (Played by Alexandra Daddario, the real reason I started watching it). After drinking away his sorrows reminiscing over the time he met Avery in a Photo booth that  somehow takes him back to the night he first met her and he’s able to use future info to change the night and thus changing the future, but of course the results very forcing him to go back to the photo booth and try again.

sometimes the movie is very predicable sometimes its (semi-) hits you off guard. Overall, it’s a so-so film.