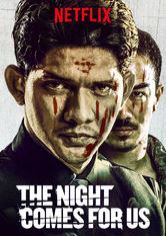 What a cool title. It screams kick ass crime drama. I saw this on my Netflix with my man, Iko Uwais on the cover (covered in blood) earlier in the week and I said I needed to get into this. I wanted to watch it so bad that I even kept going with the movie after I saw it was subtitled. I hate watching subtitled movies at home, I can get easily distracted by other things, and did not want to miss the story (Although I am writing this as I watch the thing, but I stop once the action goes down).

The fight scenes are brutal. I forgot the name of the specific marshal art that these cats do over in Indonesia, but it makes for some brutal battles.

Than again, Asian Cinema can get violent all together, It’s good that Indonesia is getting into the mix of it, thanks to Uwais and Yayan Ruhian blowing us away in the Raid and the Raid 2.

Everything is a little more coordinated than the Raid, not as raw and natural a dance, and they used a lot of slick and polished camera angles (Met to look shake of course) but that’s OK cause they so make up for it with some really cool finishing movies that end in this focus on some victims blood body (neat!)

It’s definitely a style over substance thing. An attempt to fully commercialize the new breath of fresh air to see if they can get more attention and money, but this commercial is so working on me.

And when it comes down to it, the one reason I wanted to see this so bad Mr. Uwais, totally proving he’s at the top of this game. I can’t wait to see him and Tony Jaa in Triple Threat. It amazes me how one movie can just be summed up in one awesome scene, but it happens.

Previous: The ​S​isters ​B​rothers
Next: Can You Ever Forgive Me?