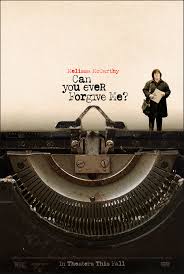 Home » Drama » Can You Ever Forgive Me?

It’s been a while since Melissa McCarthy gave me such good laughs. I tend to put Mrs. McCarthy on a high pedestal since her appearance in Bridesmaids.

The gut I bust is still recovering

When I see she’s doing a movie I come in ready to bust a gut off the shit, so when the laughs are average I’m like “crap!”.

The Advantage of Can you Ever Forgive Me? is that it looks like a drama, so I’m expecting it to go another way so when McCarthy lays down a good laugh it hits me hard. It’s the most amusing stories I’ve seen in a while.

A true story about Lee Israel who was a best selling Arthur that hit a rut, and could not get interest in another book, but found another way to make cash by writing letters she past on as the works of other writers.

If you think about the movie in perspective, though an interesting topic, especially for a round the table conversation over coffee, but an entire movie? I guess that’s the magic of Lee Israel’s writing, who wrote a book that this movie is getting it’s info from.

McCarthy gives a stellar performance stepping out of her safe zone to show you a little depth as writing cliche (During this time in her life (1991 to be exact) Israel was old and bitter booze hound hanging out in bars trying to hang onto the fame of her last book while hating on Tom Clancy whose getting paid three million dollars to write macho dick crap while she can’t even get a book deal cause she’s too much of an artist to play the game ( My favorite part of the movie was when she was putting shade on Clancy, they even had someway play him for a second). McCarthy does have one buffer in the movie in the shape of her husband Ben Falcone who plays a book shop owner who does not look too hard at the letters he’s buying from Israel.

This movie had been out for like a week and I’m glad I finally got around to seeing it. Absolutely adorable

Previous: The Night Comes for Us
Next: Game Over, Man!