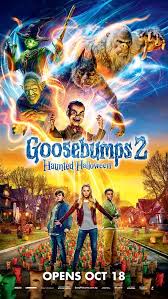 Think I like the ​first​ one better cause the ​first ​one had more jack black as RL ​Stine​, which I though was brilliant​ ​(the real Stine does make an appearance like he did in the ​first​ as someone working for ​ the school​). I feel like I’ve seen the Evil ​dummy ​episode before​ on Goosebumps (or was it Buffy the Vampire Slayer?). ​A​ group of boys accidentally unleash ​an evil puppet ​when the​y happen upon an unreleased Stine book hidden in a house he use to dwell. The puppet ​attempts to create a family causes him to use magic to bring Halloween to life​.
There is a message in both ​G​oosebumps films about the magic of books and how they make things come to life​, which make both films an overall good Halloween story​, but I still think this one needs more Jack Black. ​