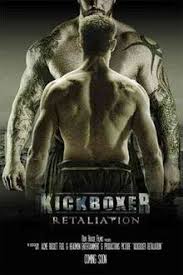 I understand why Jean Claude Van Damme was ask to be in the franchise reboot, as he was the the star of the original and the best (arguably), but it’s messed up for Sasha Mitchell who technically took over the franchise for three sequels (Playing David Sloan, a brother not even mentioned in the first film). It would be cool if he came back for the the next Kickboxer as a different character like Van Damme did.

Kickboxer: Retaliation is the second movie of the Kickboxer reboot in which Kurt Sloan is played by a new guy named, Alain Moussi and Van Damme takes a supporting role as Master Durand who teaches Sloan the art of Muay Thai. It’s a good fit for Van Damme just like Stallone’s supporting role (as icon Rocky Balboa) in the film Creed.

So Retaliation had to out do Kickboxer: Vengeance, especially since they had the great Dave Bautista as the classic villain, Tong Po. How could they possibly top that? Well I don’t know about top but the dude they got to play Sloan’s greatest challenge was huge. 6’10” and made of muscle, I don’t think I’ve every seen a villain so naturally menacing. The final fight scene was interesting as the usual flamboyant high kicks and back flips you’re use to seeing in contemporary marshal arts films (and of course any thing with Van Damme (Who started it) in it.) were not going to work on the literal mountain of muscle who growls (speaking of the villain is actually played the Mountain in Game of Thrones)

Although this new villain is great in the ring he’s not as charismatic as Bautista. To make up for this, Christopher Lambert was brought in to be the main villain, Thomas Moore. Moore uses his evil pull and influence (A.K.A, money) to have Kurt Sloan arrested and locked in a Thai prison, with his only way out is to fight his massive beast that he genetically created (Adding a very tiny percentage of Sci-Fi to the movie (and giving the villain a Drago from Rocky IV feel).

While in prison he has a run in with Iron Mike Tyson who helps him in his training. Once again I’m given a fight that I never thought I wanted to see when Van Damme and Tyson have a little tussle with each other in the prison. Not has hardcore as the fight Iron Mike had with Steven Seagal in China Salesman (literally the only reason to see that movie is for that fight that happens in the first 10-15mins (then you can go on with the rest of your day).

Retaliation is a good movie filled with lots of Marshal arts action, and if you are a fan of the UFC you may noticed Kurt Sloan going up against some of UFC’s best as well as challengers from other marshal arts scenes (it was almost like watching a fighting game).