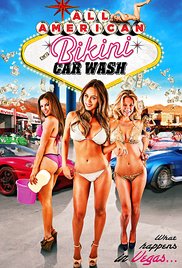 From my perception, I’m expecting any movie with both Bikini and Car Wash in the title to have nudity in it. It’s one thing if its just bikini in the title, it could just be about bikinis, but car wash as well…Yeah I’m expecting exposed boobs. This movie does not let down.

Taking place in Las Vegas, it’s the classic story of a group of dudes running a car wash that’s selling more than a new finish when they say body wash.

If this movie was made in the late 80s early 90s, it would have been filled with white girls and rock music, but these days you especially want to get a hip-hop score. Metal still does songs about girls (although I don’t listen to the bands that do), hip-hop is where its at if you just want to create a series of segments montaging hot women washing cars.

Overall, the movie is good. I’ve seen better. It’s no bikini Car wash company, but it’s good to see that the Bikini car wash genre is still alive and well.

Previous: The Shinning
Next: Kickboxer: Retaliation