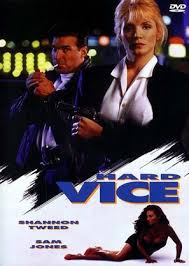 Well don’t watch this movie on Amazon Prime is all I can say. Shannon Tweed stars in this film during her Night Eyes Prime, so you know what that means? Nudity. I was expecting great Nudity, but what I got was a cable TV edit of the movie. I realized this when Tweed, in her role as a cop for the video vice squad, was getting drunk with the leading man and the two were… “bonding” when suddenly the film cuts abruptly, and that’s when I realized I’m getting jipped.

I did finish the movie despite knowing that all the nude shots were cut, but how can I fairly give this movie any sort of rating when the reason why I came to see it was literally cut out?

It was a weak cop drama made for the purpose of sizzling sex scenes (that were not there). Sure, Miguel A Nunez was hilarious as Tweed’s tech savoy partner and his chemistry with the rest of the cast would be great if this was a TV show not met to have nudity, but I can’t be fair when all I can think about is the fact that I did not get to see Tweed’s boobs (something that I’ve seen many times before sure but still).

Previous: Devergent
Next: The Shinning