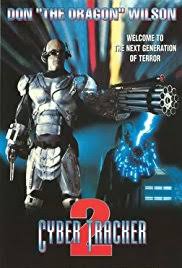 It’s a Cyborg that tracks things not a Tracker who tracks Cyborg. Not that important to bring up, but I thought I would.

I remember a time when Don “The Dragon” Wilson was a mild mannered action star. The built up was impressive, cause unlike many actions stars of the late 80s and early 90s who claim to be marshal arts champions, Don Wilson not only could prove he had the credentials but he did prove it. Many of the trailers of his movies noted he was three time world champion this or seven time world champion that (to be precise he was a world Kickboxing Champion for a whooping eleven times). This is not an insult to any of the mother marshal arts based action heroes who did not feel the need to brag or whatever, but this was definitely Mr. Dragon Wilson’s claim to fame.

A Sci-Fi action thriller heavy on the action and lite on the Sci-Fi, which I’m down with as the action was masterful. Great stunts, cool car chases lots of gun play. It was all well done to the point where it’s hard to believe it was a b-movie (But a little less hard now that I know this is a sequel to a film that most likely did well enough in the straight-to-Video market to justify shelling out more paper for the follow up)

The Sci-Fi did not pay that high of a price thanks to the story concept. Having it take place in the near future (For a present that was dazzled by the fact that someone pulled a phone out of his pocket and made a call).

So Don Wilson (with the mad good hair) is living the good life as a secret service agent with his white woman and his white woman holographic computer (Which I wish he had over cell phones), when some people frame his white chick for murder by using a cyborg that looks like her to kill the governor. Now he and his wife are on the underground while the cyber tracker hunts them down.

The only other person I know of off the top of my head is Tony Burton, famous for being Apollo Creed’s trainer in the Rocky movies. He plays a police chief (who commands a secret service man?). Burton’s acting is not on point but I got to admit I love the Rocky movies enough to love seeing him in the film (Betting that was the plan).

Anyway, Cyber Tracker starts off weird. The cyber tracker is in this big flashy body armor that makes me think the film is going to be more Sci-Fi than it actually is, cause soon after when you see the cyber tracker again he looks more like the Terminator (Except big bald white guy). I wonder what happen? They use the image of the armored cyber tracker for the poster but did not continue the movie with it. I’m wondering if they fucked up and spent the whole budget on the fabulous action sequences and were like “Oh fuck, what about the body Armour suits?” or was someone like more action less Sci-Fi like a few days after shooting begins.

The latter makes sense cause you got Don the Dragon Wilson in the film so you want to do your best to promote it as a great action film, and it is man! I am just really surprised that a straight-to-Video film of the 1990s was fixing my action needs like this. Almost every sequence ended with something blowing up needlessly and dramatically.

The only problem with the film is that knowing who Don the Dragon Wilson is he did not do nearly enough kicking and punching and far too much gun play. Technically Chuck Norris went through this same phase. He did a butch of action films that displayed his marshal arts but wanted to transition over to real deal Gun totting action hero (That’s were the money’s at I guess), which is how we got Mission In Action. It worked for Norris but not Wilson as it seems cause he did fizzle out sometime in the late 90s after a guess spot on the black sitcom Moeshia.

Although, Cybertracker 2 tells me otherwise. This movie was good, better than I would have expected. If you are looking for a good action film The Dragon delivers with this one. I can recommend