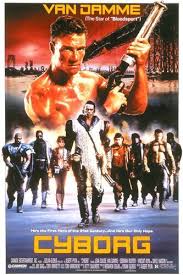 The iconic tale of the development of this movie was that it was suppose to be the sequel to Masters of the Universe, which starred another heavy accented muscle bound 80s action hero Dolph Lundgren, but the amount of mullah used to make the movie did not match the profit they took in and the sequel to He-Man was shelved, but I guess their were far enough along in pre production on what they thought was a sure thing that they wanted to see if they could make a film on the sets and costumes they all ready had (biting the style of Roger Corman). That movie was Cyborg, starring Jean-Claude Van Damme who looks like a baby in this.  This movie came out after his breakthrough, Bloodsport (but in the same year as kickboxer). I would not be surprised if it was not made first cause from what I herd, Van Damme was a hard sell for the film company Canon and the only way that could be is if they had not seen Bloopsport,

Van Damme plays the perfect loner who lose something important to him, and he tries to get it back by helping strangers who really need it. In this case, set in a post apocalyptic world were a plague is causing misery and dispear, Van Damme runs into a cyborg who has the cure and needs his help to get it to the last scientist on Earth so they can save the world.

The only problem is their is this one dude who so dwells on the misery that he does not want it to change anything. I feel like the villain himself was recycled from Masters of the Universe concept as he’s very colorful with this deep brutish voice that says I was made for Saturday morning style villainy.

What I find funny about this film is that there is a sequel called Cybrog 2, which has nothing directly to do with this film at all (but stars a baby faced Angelia Jolie (if Van Damme and Jolie were in the movie together people would think it was a french film), but the sequel after that seem to be more directly evolved. Realistically, Van Damme was enjoying the peak of his success at the time so I guess coming back for Cybrog 2 was out of the question (Some fate as Universal Solder 2).

Anyway, Cybrog obviously is not going to win any awards, but it is a very enjoyable film. A little to slow and strengthened out and could have been filled with way more fast paced hits and kicks but it’s a solid turn for early Van Damme.