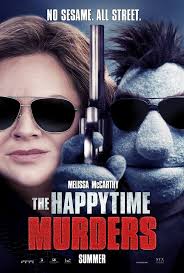 Did Jim Henson’s Son do this movie?

I think it was a little too dark and disturbing for the late great muppets creator, but Brian Henson makes a film that fits right up Melissa McCarthy’s alley, but not as much as I would have liked. It’s good for a few giggles, but it’s not as funny as I hoped. It seems like I may have McCarthy on too high of a Pedestal these days cause I was expecting to get knocked out of the park when all I got was a bunt. This had a lot to do with the fact that the movie really focus on the puppets more than the humans and Melissa McCarthy was just a famous face they could put on the poster next top a blue puppet. It has it’s moments of real fucked up giggles (puppets having sex, puppets getting their face blown off and my favorite, a puppet who gets surgery to look more human), It’s barely holding a candle top what McCarthy was attached to in the past.

Previous: Graveyard Tramps
Next: The Bloodsucker Leads the Dance