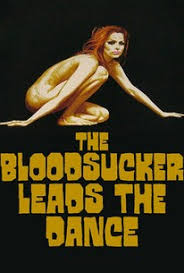 A glimpse of some blood covered breasts as a woman gets bitten by a hot vampire. Nicely done, I’m lorded in.

I was a little afraid that the filmmakers were going to use nudity to cover up how boring the film was going to be. It starts off as this history of the horror film like concept in which a woman in a demonic costume lectures us in her most seductive voice about the concept of the slasher, while hot women wearing nothing buy overalls wield around basic slasher weapons. It would have taken the large amount of nudity on the screen to keep my eyes glued.

But  as it turns out what I’m watching looks like a series similar too Elvira or Mystery Science theater 3000 called Redemption. The intro I just told you was just that met to act as bookends to the film I’m about to see.

I’m not actually sure what the full purpose of Redemption is, but Bloodsucker Leads the Dance is one of those Eastern European movies that has an odd dub. I don’t want to say bad dub, but just fairly obvious that this is a dub on a 35mm print so old that I can actually hear that needle on the record.

It took far too long for the killing to start to happen and as it turns out, the film is more of a homage to Giallo pictures as the film (eventually) becomes a murder mystery.

I hate to be a downer on a film with some descent nude shots but it’s very lackluster.