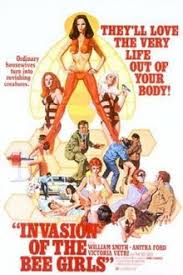 Or Attack of the Bee Girls as it’s called everywhere else except my Amazon prime account.

A film written by Nicolas Meyer who is best know to me as the guy who directed a few Star Trek movies (Including the best of all time The Wrath of Kahan). I looked it up just to make sure that it’s the same guy I’m thinking about (According to the opening credits, this movie stars Will Smith), and indeed it’s not only the same guy but it’s his first movie credit.

The music is also something to take in here. Written by some guy name Charles Bernstein, it’s really good. Not better than the scene in which a woman is riding her bike buck naked, but good music.

So the invasion of the Bee Girls as it turns out is a far better title. The film is about a woman who does an experiment that creates a some hot insect like women who seduce men, fuck them and sucked the life out of them.

Will Smith (actually William Smith) plays a government investigator trying to figure out what’s going on. William Smith is almost as charming as the Fresh Prince, but of course not as big and black, but he does get to show off his street brawl skills as he had to deal with a town filled with frustrated men being killed after having sex with beautiful alien bugs.

Why was this film’s alternative title Grave Yard Tramps I don’t know. The poster makes it looks like that’s what it’s going to be about but it’s not that type of horror movie. If any thing the title Morgue Tramps would make more sense given a lot of the movie takes place in a cornier room where they’re trying to figure out why this is happening to dudes.

Honestly it’s not a bad movie. A very workable story that puts detective drama inside this Sci-Fi Horror. Wonder how much of that Meyer writing had to do with that?  Herd he wanted this name off of the credits when he discovered they wrote some more stuff (possibly more nudity) without him knowing but his manager told him to let it go and just take the credit. Oh Well, something to talk about when he’s at the Star Trek convention.