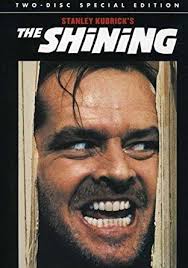 I decided to make somewhat of a push to read some of the books that became movies. The Shinning took me a long time to read. Not that big of a book but far meatier than what the movie would state.

This push actually started when I saw X-men origins: Wolverine. Four years before the film came out marvel released a comic book called Wolverine: Origin. The first two books in the five part series told the story of how a young boy discovered he was a mutant. As lackluster as I thought Wolverine’s first solo movie was, I was really impress about how they were able to adapted these two books in the first five minutes of the film.

Also, though I never read any of the Harry Potter books (even though I own The Order of the Phoenix) I could watch the movies (Especially the first one) and tell that a chapter is missing and this part would be longer in a book.

I want to see if I can develop that type of eye for those things. I watch so many movies and know the formula so well that sometimes I can predict the ending before it happens (Which, I want to note does not make a bad movies becomes sometimes it’s about the jar that your poor the Kool Aid in).

Yeah, I saw the movie a long time ago. Way before I read the book. Of course what it does for me is that now when I read the book I have no imagination. I already have a perception of what the Overlook would look like and what Jack Torrance and Danny and Wendy look like. The only place where this seemed not to work is with Dick Hallorann who was played by Scatman Crothers (In his second movie with Jack Nicholson following One Fell Over the coocoos Nest). Dick Hallorann started out as Scatman Crothers when the movie started but as I kept reading I began to picture a bigger black man who is a more youthful 60.

Although, I could have never imagined Dick’s pimped out Florida getaway.

The first thing I noticed after reading the book then watching the flick is how visual the book really is. Makes me wonder if a filmmaker seeing the images come to life in his head is what makes him say this is the book? (I have to say yes, because I’ve read some books in which afterwards I said I know how this could be a movie).

Turning Stephen King’s words into motion pictures makes a lot of the book go by quicker. Suddenly an entire chapter in which Jack Torrance is introduced to The hotel and his duties as it’s new caretaker and how isolation can fuck with one’s head took barley a few minutes in comparison and the show goes on. Noted, I did not remember that much of Stuart Ullman from the movie the first time around and he seem to have a bigger role in the book (or at least more memorable), and the distribution of the character in the book did not make me think of Barry Nelson (the first man to play James Bond). I was thinking either Toby Jones or at best, Sam Rockwell. Overall, Stanley Kubrick’s detail with scale and motion makes the words come to life, great visuals.

I will say this. I’m not a big reader, and this is probability why I did not find the book that scary as other people have said it is. It’s definitely more dark as the family seem to be dealing with some big personal issues, like the fact that the Torrance are at the hotel because Jack is a drunk who can’t hold a job and Wendy does not have the strength to leave him and raise her psionicly gifted kid by herself.

In all fairness I never thought of the film as a horror movie either. It’s very disturbing, thanks much to the performance of the great Jack Nicholson who looks wacked on coke (Herd a rumor he had to snort it all day to deal with legendary filmmaker Stanley Kubrick, who attention to detail made him a bit of a jerk) 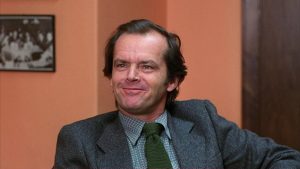 Something about him right here just says I can’t trust you with my hotel. 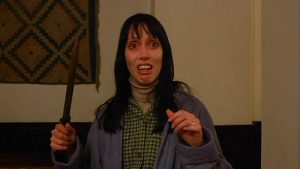 I remember the first time I saw the movie I though she was not that attractive but watching it now she’s the perfect goth style beauty that goes with the whole look of the Overbook and makes the film more scary looking.

In reading the book I realize that the shinning is very similar to the film Stir of Echoes, which technically considers a cop’s son’s ability to see the dead a Shinning (As explained by a black dude (who would have been a better  Hallorann )who also has the–oh shit! Stir of Echoes totally rips off the Shinning! just peeped that! they try to hide it by not calling it the Shinning and the boy can only see the dead, but comparing his powers to a flashlight–total shining)