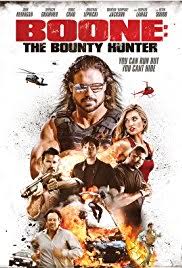 I saw a trailer for this on my Netflix cue and it looked amazing. Some dude leaping from building to building, doing back flips off of them in order to catch the bad guys. I needed to know what was going down.

Noticed in the opening credits a lot of familiar names, not A-list by anyone standards, but well known enough to keep watching: Keven Sorbo, some chick that was on Baywatch and Quinton ‘Rampage’ Jackson. I was expecting to see Tiny “Zesus” Lister’s name on the list after all he was featured in the still Netflix used to advertise the film.

It’s an impressive action comedy about a Hunky booty hunter who seems to can’t find a shirt that fits him properly who has a TV show about to get canceled if he can’t kick up the ratings by tracking down the son of a dangerous drug dealer in mexico.

The movie reminds me of Pamela Anderson’s TV show VIP. He uses his celebrity to track down famous (or rather D-List) stars who have warrants due to unpaid parking tickets, but in order to keep his show on the air, he needs a season finale with a far more dangerous bounty (Technically the little kid from Jerry McGuire).

Whatever marshal art John Hennigan is doing it contains lots of flipping and kicking, which is great because Boone has to go up against some Capoereila masters in the film (one includes THE Capoereila master, Lateef Crowder). The two styles mix together well and create a series of descent fights that go over well with all the action the movie has to offer.

If you are a fan of action flicks than Boone: The Bounty Hunter is the perfect satire for you.

Previous: Fugitive Rage (Great action flick with Hot Chick in lead)
Next: The Howling (or B-movie version of An American Werewolf in London?)