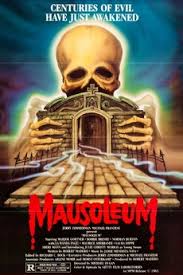 Wow! can a bitch get ugly!

A movie distributed by a company called Cinema Epoch, who took over the distribution at a time of the Witchcraft franchise from Troma. Every time I  see the company logo I always think that they are a Christian production company. The people who own the company my go to church every Sunday, but I’ve only seen their horror releases.

Similar to Witchcraft, Mausoleum is not a movie Cinema Epoch made but something they own the rights to and released. It’s an oldie, made somewhere in the 70s or most likely 80s which maybe the reason for the bad sound (a rumbling noise that occurs from beginning to end sounding like wind bushing up against a mic) It was so fucking annoying. It made a bad movie so much worse, so much!