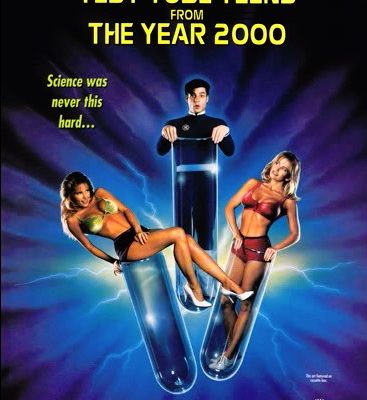 This movie may not be as good as I remember it. I just remember it bringing back found memories of my teenage youth.

I stayed up and watch it (but thinking back it would have been easier to just wake up at 5pm to watch it ). The sun was coming up and I had been almost 24 hours without sleep but I was really excited, or at least that’s how I remember it. The only thing I fully remember about this movie was the first girl who got naked in the movie. The rest of it was not even a blur it was a never was. I’m guessing I feel asleep while trying to watch it , which is really funny, simply because before writing this post if you asked me about Test Tube Teens from the year 2000 (Also known  as Virgin Hunters if you want to watch it on Amazon Prime), I would have said it was the greatest film of all time (Are those first pair of breast that amazing? I can tell you as an adult watching this film now that yes, they were that great!)

I really like the title of Test Tube Teens form the year 2000 far better than Virgin Hunters, but I’m guessing they change it cause technically it made no sense. The movie was released in 1994, only 6 years before the the year it said the kids are from, yet according to the plot it’s been 25 years since a major cooperation started it’s  kinda realistic plot to take over the entire world by bailing out America’s debt in order to control it and moving in on the rest of the world like a hostile take over. Three teens born from test tubes in a world where sex is outlawed (and they would all be virgins no matter how horny one of them seem), are persuaded by their rebellious teacher to seek out the truth and rebel too. In their search, they discover a time machine (out of nowhere just stored under their school) that takes them back to 1994 where they can stop Camella Swales (played by Morgan Fairchild) from creating a future where the only downside seems to be nobody is allowed to fuck (Totally makes sense why it’s two horny dudes who never had pussy who are determined to change that future)

Definitely don’t remember Fairchild being in this flick so I’m sure I did fall asleep while watching it (They did not have Monster energy drinks back then).

Other obstacles include a man from the future doing a very bad Arnold Schwarzenegger impersonation, attempting to parody his role in the Terminator movies. This guy technically constitutes why they would call the movie Virgin Hunters, despite the feel that his part is minor in the end he actually plays a major goal for the Test Tube Teens finishing their mission.

Overall, I held this movie in such high regards for so many years, and to be honest it actually does not let down. As I progress in the movie I did start remembering more and more (especially when it comes to the first chick that got naked. Her name is Sara Suzanne Brown and she plays Reena and every time she appeared in the scene my brain recalls that) In the terms of the Soft-core porn genre it is indeed one of the better ones. First it gives the audience what they want, hot women running around naked, and under this guise an amusing story. Did we need a good story? no, but I do like it when filmmakers in this situation think outside the box while still looking from inside.

Previous: The Miseducation of Cameron Post ( Your preaching to the choir)
Next: Mausoleum