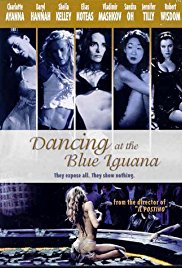 I’m reading this book called B is for Bad Cinema. I thought it was about B-Movies, but in reality it’s about actual Bad Cinema, or more like movies so  Bad they are good and examines what they means and why that is.

I do need a scientific annalist to tell you why Dancing at the Blue Iguana is so Bad it’s good. There’s nudity in it.

The Blue Iguana is a strip club and the movie is about strippers who dance there (Making the title a very good one cause it does not miss the point).

It’s amazing how uninteresting the story is. the movie blends together the lives of the strippers who work at the Blue Iguana, in a way that seem to be trying to make them more human. One stripper wants a baby to make her life complete. One is into poetry on the side, and of course one stripper is on drugs and  one seems to be in trouble.

It fit all the stereotypes including the the major one: the stripping.  In-between the stories in the movie that mostly takes place in the strip club we get to see a series of naked women sliding down the pole.

So how could you not like a movie that does that despite how dull the movie actually is?

It’s like Showgirls before it. suggested as one of the worse films ever made, by a generation of dudes who saw it twice just to see Jessie Spano naked.

Man! This movie has the balls to be long as shit too. The stories of these girls (at least the way it’s told) is not interested to be more than 90mins

Previous: The Spy Who Dumped Me: Action comedy leans more towards action.
Next: The Miseducation of Cameron Post ( Your preaching to the choir)