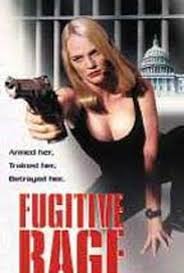 Tough chick, behind bars. Sounds like a winner in the Fred Olen Ray collection.

Tara McCormick is a woman sent to jail for trying to kill a mob boss who just got out off scott free for killing her best friend, but a government agency offers her a deal to get a full pardon if she finishes the job she started.

Can’t help but to think they could have gotten Cat Sassoon for this film. At the time Cat (daughter of Vidal Sassoon was doing cheesy b-action film and she just so happens to do a little marshal arts (or at least had the skills to fake it).

Although the women they got to play in the film was actually really hot and had a few good moves of her own so it was not that bad.

What was bad was the acting. Technically not the actor’s fault. It was a cheesy action film and they really hammed up every word in this film, it was like watching a cartoon, or a parody of an action film which is what this was becoming.

Veteran b-movie actor Jay Richardson is especially guilty of this with his role as the stereotypical bad guy,Tommy Stompanato. In his defense he did have a few moments were he could show that he took an acting class or two. Best guess is that the production schedule was openenough on that day to allow him to get it down.

There were a few low budget b-action movies that starred girls. It was a good market, so long as the girl was willing to get naked and do a sex (and or (in this case both) Shower) scene the production had no problem showcasing that ladies can handle a gun as well. Not fitting for today’s time’s standards (a lot of stuff inst), but I must say it was definitely an overlooked start to something.