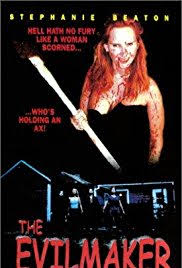 The story in itself peaks interest and it’s not too unbearable for the cheap price of the film making. I actually liked it overall. The movie stars Stephainie Beaton, best known to me as the chick who played  Det. Lucy Lutz twice in the Witchcraft series.  Though  under Beaton one of my fav characters in one of my fav franchise changed personalities a little, She was the only one of the actress to play  Lutz to show her boobs, which is what Evilmaker seems to be about, Stephaine Beaton showing her boobs. At first you like it , then you get totally use to it. There was a cool scene were she slaughters someone with an axe and her boobs are coming out, that was cool. blood all over the place.

Beaton is Serena who just broke up with her man goes on a girls’ weekend to get over it, but the place they selected has evil ghost and shit.

Cool title and decent story but it could have been better.

Previous: Chopping Mall
Next: Ladies of the House