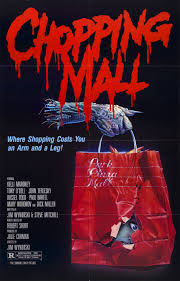 Man this was a good slasher film.

I knew I saw this before (and I think there is a similar movie called kill bots), so a mid-western american mall decides to use cool 80s robots as security guards, which seems like overkill for a mall. I mean can I purchase plutonium in this mall? From the first time we see these robots in a commercial withing the movie I began to have flashbacks of Ed 209 from Robocop being being exhibited to the board of OCP with gun blazing results. This was a bad idea, but  Chopping Mall does not have Bob Martian to be like that’s wait for one of the old men or college age rent-a-cops to get injured in the line of duty so we can turn him into Peter Weller in a 50 pound metal costume (Most likely because Robocop comes out a year after this one). No, instead everyone was like this is going to work out fine (yeah right!)

In all fairness, these dumb as kids were breaking mall policy by deciding to sleepover and have sex in one of the furniture stores at the mall (Although I must admit, if you would have ask a dumb teenage me to do this I would have. It sounds brilliant in comparison of the stupidity of going into the woods to sleepover)

Then once that’s out of the way, the killing begins. It’s as if these robots had a virginmetor (or they’re pervs looking through security cameras. The mall gets locked down like it’s the Pentagon and suddenly, three robots armed with lasers start going berserk (seriously! what’s in this mall that a robot needs fucking laser weapons to–you know what? it’s just a movie).

Julie Corman proves that she’s got as much skill as her legendary husband Roger Corman with this movie directed by the great Jim Wynorski and features a cameo but long time collaborator of Corman’s, Mr. Dick Miller.

The sex was good, great to hook you in and keep you in your seats long enough to justify that the feature needs to be like 90 mins. The violence however was excellent. The death’s were actually pretty swift, nothing was drawn out, these kids were not tortured they were put out of their mystery as swiftly as possible with as much blood and guts as possible.

This one kid just gets surprised by a laser that literally makes her head explode and it just started a ball that they just kept running with.

I was not expecting to like this movie so much but I do. I feel sorry for these killer robots, they could have went down in slasher history as one of the best and they should have, if somebody thought enough to keep up the momentum (Cause honestly, I’ve seen far worse movies that ended up making three of four sequels)

This is a classic if I say so myself.

Previous: Prom Night IV: Deliver Us from Evil
Next: Evilmaker