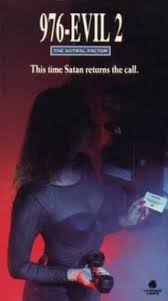 Begins and ends with a bang.

It begins: with an excellent shower scene in which a girl is being chased throughout her school by the slasher.

It ends: with the best satire I’ve scene in a horror film, I hate to spoil it, but…

The movie’s about some sort of horror scope like number. A professor at a university is the main suspect in a series of murders happening around campus. When he’s captured, he ask for one phone call, and he calls the horror scope hotline and begs them to help him out. Apparently, whoever it is on the other side of the phone has promised this dude power and immortality if he collects souls for him, but now this dude’s in jail, so the voice on the phone gives this guy the power of astroprojection so he can continue collecting.

The only two people who know what’s happening is a biker who came to town to hunt him down and the movie’s final girl. As they try to stop the killer from hunting souls the final girl comes across the slasher (Who is her professor at the college and has a crush on her), and kills her best friend right in front of her. Then the slasher gets on the phone with the cops and in her voice tells them “I just killed my best friend”, but here’s the best part!

When the biker and the final girl deal with the slasher it makes the police know for a fact that somehow this slasher was able to get out of his holding cell and kill a bunch of people, but they can’t prove it, and because they can’t prove it, this means there’s no evidence that it was not the final girl who called the police and told them she killed his best friend, and she’s sent away.

This is one of the best scenario ever in a horror flick. One of the things about Slasher movies is that a lot of them are not very good but each one of them has a gimmick that makes it feel like it’s great. Like if you were to do a list of greatest slasher films of all time, Halloween should always be the number one (With Texas Chainsaw Massacre and Psycho being the only real contenders for that spot) it started it all and because of that Halloween is a slasher film above all others. After that, it gets harder to assemble the list.

Nightmare on Elm Street belongs on the list. When it came out it was a creative spin to the slasher genre (dude came to you in dreams) and with a director like Wes Craven calling the shots no wonder it was visually amazing. I do feel though that the slasher genre is filled with a lot of films with unique ideas like: Sleep away camp , the Burning, and Child’s play ( A bizarre concept that worked so well). Yet I still find it hard to compose a stellar list of slasher films.

For this reason I’m going to hold 976 Evil II in such high regards. 976 Evil was already a good idea with the slasher using modern technology to do his killing. If you think about it, a lot of horror movies use the most primitive (but effective) tools to kill . Knives spears, and the most modern being a chainsaw. 976 Evil comes along and suddenly slasher are making a phone call to kill from a distance (I don’t know if that’s how the original goes)

So B-movie boob queen Jim Wynorski wanted to step up the unique idea a notch with an ending that makes pure otter sense when you think about. How many times have I seen a horror movie in which a mass murderer just went through a load of kids like a bloody paper shredder and only person who can tell the cops what happen is a little shooken up white girl? There should be a movie in which at the end they got one black cop who’s like “oh we just going to believe her cause she says that’s how it happen?”

Most of the movie breezes by me but that ending is effective.